As Miriam Gross says in the Spectator 'Diary' this week with all this talk by the BBC of the 'Murcoch Empire' shouldn't they refer to themselves, a much more powerful organisation, as the BBC Empire?!
Posted by Niall Warry at 09:14 No comments: 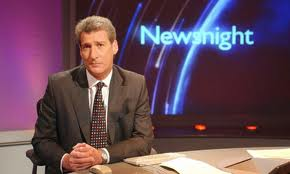 I believe it must have been Monday night on Newsnight that Paxman interviewed the English Defence League's leader SM Lennon. Of course being ' rightwing' Paxman tried to lay into him to try and make him and his organisation out to be the very devil incarnate.

I believe he failed spectactularily which only goes to show Paxman can be beat if you stand up to him - oh how I long for the Tories to do the same!!

Paxman tried to connect friends from Facebook on the EDL's Website as being the responsibility of Lennon but Lennon pointed that he was no more responsible for them than the BBC was for Facebook friend who attach themselves to the BBC website. Paxman tried again to say the EDL's website had pictures of Muslim faces in the cross wires of rifle sights but again Lennon said this was NOT the case  but some attached 'friends' might have.

Once again the BBC showed its bias for the Guardian reading leftwing liberals they mostly all are.
Posted by Niall Warry at 20:45 No comments:

Here's one I forgot to record from last Saturday.

At 11.20am Sir M. Campbell and Lord K Baker were being interviewed about the loss of importance of our Parliament at Westminster.

Yes you guessed it NOT one word about the EU was discussed which as most people know is the primary cause our government now has less to do. This explains why 'Schools and Hospitals' is all our politicians seem to talk about!

Neither of course did the BBC interviewer, desperate not to criticise the EU, bring this up.

Talk about Murdoch having too much power what about the near monopoly the BBC have of terrestrial TV.
Posted by Niall Warry at 22:50 No comments:

His long article about the BBC's coverage of the hacking scandal was titled:-

THE BBC's BIAS HAS BEEN ONE OF THE MOST SHAMING ASPECTS OF THIS ENTIRE SORRY SAGA.

Says it all really and the bias BBC has excelled in its bias over this and in particular Stephen Glover highlights Tuesday night's News at Ten and Newsnight with Gavin Esler on the same night.

As an institution the BBC loathes Murdoch because he has brilliantly built BSkyB into a formidable programme rival and has shattered the BBC's former pre-eminense in sport coverage. Also of course the many left-leaning BBC journalists (which means most of them) regard him as an anti-Christ for being Right-wing unashamedly pro-American and free market.
Posted by Niall Warry at 18:17 No comments:

I read in the Daily Telegraph today that a report by the BBC's Trust on science output gives the BBC the go ahead to report impartially in favour of Climate Change as it is accepted as the majority view by the scientific community.

Well of course it would be the majority view of the scientific community the the BBC and others link in with but there is a huge swathe of opinion which is increasingly saying Climate Change is a load of popularised propoganda.

The bias BBC is seriously going to have egg on its face when the whole climate change lobby's pet belief is disproved over the next few years.
Posted by Niall Warry at 12:31 No comments:

Two great pieces on the bias BBC in the Daily Mail today.

1. An article by Ben Todd explaining how the BBC paid actors £1million to show bossess how to deal with rebel staff. This is typical of a bloated State run organisation that squanders your licence fee money with little care or fear of having to be really accountable.

2. The main article on the Leaders page by Melanie Phillips pointing out the hypocrisy of Ed Miliband attacking Murdoch and News International when only two weeks ago he was happy to suck up to them. Also she points out that to attack Murdoch as having a monopoly without attacking the near monopoly of the bias leftwing leaning BBC is pure humbug.
Posted by Niall Warry at 20:34 No comments:

I fear that I can only recall that this was on BBC radio sometime in the middle of the week.

Chris Huhne (what happened to the stories about the speeding offence?) was being interviewed about the Coalitions Energy policy during which he stated that he supported Nuclear Power so long as it wasn't subsidised. ( He used to be dead against it but no doubt being in government has made him realise how naive he was!)  If the BBC reporter was doing his job properly he would have point out that the inconsistency that the only reason 'Green' energy gets a look in is because it is so heavily subsidised.

But of course the pro Climate Change BBC stayed well clear of such a question as they are totally bias in favour of 'Green' energy and the whole Climate Change scare.
Posted by Niall Warry at 08:56 No comments:

The whole programme was given over to a studio discussion about the 'Hacking scandal' with a handed picked studio audience of floating voters and chaired by Paxman.

As you know the BBC has been banging on for days that the British public were appalled by the News of the World revelations as of course the BBC are dead against a right wing competitor at BSkyB and wanted to do their bit to try and stop Murdoch taking it over.

Well the studio audience was clearly underwhelmed by the hacking revelations and try as he did to get the audience to support the BBC's concern of the situation Paxman could not get them to budge! What the BBC would have clearly loved would have been for the audience to be baying for Murdoch's blood.

The BBC is bias and has its own agenda which is usually totally different to the average voter in the street.
Posted by Niall Warry at 10:44 No comments:

During an interview in which Paxman was asking Huhne about the recent and anticipated future increases in  household energy bills not one mention was made of the fact most of these increases are as a result of green taxes imposed on us by EU regulation.

We all know the BBC receives soft loans from the EU so they take great care not to criticise them.

The BBC continues to be bias in its reporting in favour of the EU.
Posted by Niall Warry at 09:21 No comments:

The BBC and the mainstream media are wrapping themseleves in the cloak of morality over the hacking scandal yet still engage in many tittle tattle stories and omit to cover the real news stories especially if the story goes against their Guardian views of the world.

http://eureferendum.blogspot.com/2011/07/opportunities-lost-portraying.html
Posted by Niall Warry at 08:04 No comments:

Please be under no illusion that whatever crimes have been committed by Editors, reporters or the police the bias BBC does not want any competition from a right wing Group own 100% by Murdoch. The BBC is used to holding centre stage with their leftwing Guardian leaning views.

WRITE ABOUT THE BBC to YOUR MP, MEP & Councillors